You are here: Home

The Dairy Science and Food Technology (DSFT) website provides scientific and technological information, Cloud-based tools and consultancy services for food scientists and technologists working in industry and in colleges and universities. A discussion forum and interactive content through "On Line" calculators are also provided. Writing/citation resources including a Harvard-type reference wizard and a range of citation-wizards can also be accessed.

The requirement of gelato and ice cream development technologists to construct freezing curves for ice cream or gelato mixes has been discussed. In particular knowledge of the concentration of frozen water at serving temperatures can be used to ensure that batches have acceptable hardness or scoopability.  Additionally the mass of frozen ice present can be used to calculate resistance to heat shock, storage stability and susceptibility of packaging to deformation during storage and distribution.

Calculation of a freezing curve is fairly straightforward and has been summarised on this website and by Goff and Hartel (2013). The curve can readily be calculated using a spreadsheet. Three spreadsheet packages can be downloaded from this page.

The first two packages are similar except that package 1 is unlocked and also contains an Excel workbook listing sucrose concentrations and the corresponding freezing point depressions (FPDs). The spreadsheet shows the Excel trend line with the corresponding fourth order polynomial regression equation and R2 value. Again all values are unlocked. The data used to construct the freezing point curve were extrapolated from Leighton (1927) by Goff and Hartel (2013). Leighton (1927) obtained this data from the earlier work of Pickering (1891).

Please read the Frequently asked questions (FAQ) about the Microsoft Excel Ice Cream Mix spreadsheets supplied by the Dairy Science and Food Technology website before making a donation to obtain these spreadsheets.

The formulas used to calculate FPD are locked in package 2 and there is no sucrose FPD calibration curve.

Details of the spreadsheet for calculating the freezing point of gelato/ice cream mixes are shown in figure 1. 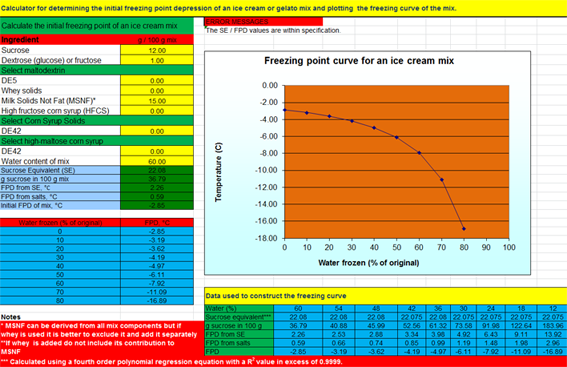 Ideally whey solids should be entered separately from MSNF. If so, their contribution to MSNF should not be included in the figure for MSNF.

Options have been provided to investigate the use of maltodextrins ranging from DE5 to DE18 (figure 2).

A facility to investigate the use of high maltose corn syrup of DE42 and DE50 has also been added (figure 4).

The spreadsheet also provides users with two warning messages if the sucrose equivalent concentration in the frozen mix at a particular temperature exceeds 180 g per 100 g water. Pickering (1891) only investigated the effects of sucrose concentrations up to 180 g of sugar per 100 g of water so caution is required if users attempt to work with higher sucrose equivalent concentrations. Additionally cells giving the high values are coloured yellow or red depending on the magnitude of the calibration discrepancy.

Subscribers to the DSFT On-Line Subscription Calculator can access a fully working version of this spreadsheet and high value premium resources for a nominal cost.

Note this spreadsheet package is  available as a free download to users who purchased the complete set of ice cream mix spreadsheets (pack 9).

Please make a donation of £50.00 to obtain these spreadsheets.

One locked Excel spreadsheet, cost £15, for calculating the freezing point depression curve for an ice cream or gelato mix.

Note this spreadsheet is now available as a free download to users signing up to any of the subscriptions for  the Dairy Science and Food Technology ice cream mix calculator. Current subscribers can download the package using the Resource tab on the Calculator.

Please make a donation of £10.00 to obtain this spreadsheet.

This spreadsheet is similar to the package above except that the formulae used to perform the calculations cannot be accessed and the calibration curve used to relate sucrose concentration to FPD has not been provided. The spreadsheet uses the regression equation to do the calculation but users cannot access the equation because the cells are locked.

This is an extensively customised version of package 1 and contains a modified version of the workbook for generating the curve (Figure 3) and also package 1.

Cost £100. This also includes 1-year's free access to the On Line Ice Cream Mix Subscription Calculator. The latter must be requested to webmaster at dairyscience.info to activate your account. 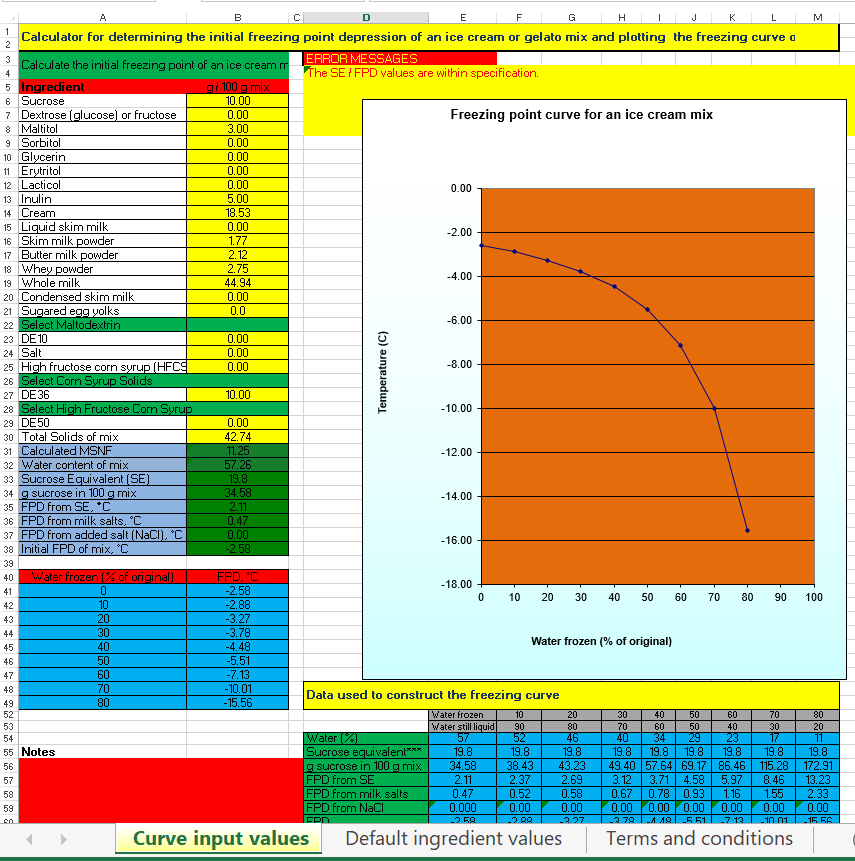 Additional sweeteners including polyols are included, as are a range of additional milk sources, salt and sugared egg yolks.

A "values workbook" giving default ingredient values is also provided. These can be modified or added to by the user. A warning is provided if the linear relationship between sucrose equivalence and FPD is exceeded.