You are here: Home » Bacteriophage lysins

Phage release, the final stage in the phage-life cycle, has been extensively studied and is caused, at least in part, by the action of phage-induced hydrolytic or lytic enzymes.

These enzymes have been designated using various names including phage-lysozyme, endolysin, lysozyme, lysin, phage lysin, muralysin, muramidase and virolysin. Note that some of these designations describe enzymes with similar substrate specificity.All phage lysins are characterised by their ability to hydrolyse specific bonds in the murein or pepidoglycan layer of the cell wall. This is the layer responsible for the rigidity and mechanical strength of bacterial-cells.

There are several types of lytic enzyme as defined by the cell wall linkage cleaved, figure 1. These are either glucosaminidases, hydrolysing the glycosidic bonds between the aminosugars (N-acetylmuramic acid and N-acetylglucosamine) of the peptidoglycan, amidases, which cleave the N-acetylmuramoyl-L-alanine amide linkage between the glycan strand and the cross-linking peptide, or endopeptidases that hydrolyse the interpeptide bridge linkage.

Muramidases produced by phages for lactic acid bacteria, one of two classes of glucosaminidase enzymes, also called endoacetylmurmidases have been well characterised particularly for lactococci. These enzymes hydrolyse the N-acetylmuramyl-N-acetylglucosamine linkage releasing muramic acid; they have the same substrate specificity as hen-egg lysozyme.

Most of the lactococcal phage lysins characterised todate have been produced by phages with prolate morphology; these seem to 'overproduce' lysin compared with isometric-phages.

Characterisation of partly purified lysins produced by lactococcal phages revealed that they were basic enzymes, having high isoelectric points, e.g. Tourville and Tokuda (1967) reported that a ØC10 lysin (produced by an isometric phage) had an isoelectric point of >8.6. This mean that lysins have a net positive charge at pH values below their isoelectric point. Because lysins are positively charged they can be purified using weak cation exchange resins e.g. Amberlite CG50.

Sensitivity of phage and lysin to thermal inactivation

Phage lysins, particularly those of lactococcal phages, are much more susceptible to thermal inactivation than phage. In the case of ØC2(W) lysin, rapid inactivation occurred in buffer at 47°C whereas the virus showed little change in titre under similar conditions at 60°C.

Relatively few studies reporting the effect of temperature on lysin activity have been reported.

Since Q10 and Ea values are enzyme and not substrate dependent, they have utility in differentiating between phage lysins.

Lactococcal phage lysins have been shown to require reduced suphydryl (-SH) groups for lytic activity. Complete inactivation of ØC2(W) lysin was found using a 10-5 M solution of p-chloromercuriobenzoate. This inhibition can be reversed by cysteine.

The sensitivity of some lactic acid bacteria to ØC2(W) lysin is shown in table 1, Mullan and Crawford (1985b).

Lysis of group D streptococci by group N phage lysin was first reported by Oram and Reiter (1965). The wide lytic range of phage lysin compared with the relatively narrow lytic spectrum of particulate phage provides additional evidence for the role of lysins in the nascent phage phenomenon generally (see also Tourville & Tokuda, 1967) and the involvement of lysin in the inhibition of acid production experienced when certain paired-strain cultures were infected with ØC2(W) (Mullan & Crawford, 1985a).

Unlike ØC10 lysin (Tourville & Tokuda, 1967),ØC2(W) and ØML3 lysins (Oram & Reiter, 1965) failed to lyse M. lysodeikticus. The lytic reaction of lactococcal phage lysins towards this organism may prove useful in their differentiation and, indirectly, in the differentiation of lysin-producing phages.

The activity of a ØC2 (W) lysate towards freshly harvested strains of lactococci and lyophilized cells of C2 is shown in figure 2.

A  marked decrease in absorbance with time was observed for all strains studied. No significant decrease occurred over a 4 min period for control cell suspensions in which lysate was not included or when heat-treated lysate (90 °C for 5 min) was used. Lyophilization markedly increased the sensitivity of C2 to lysis. Cell suspensions, incubated with lysate for 1 h at 37°C and examined by phase contrast microscopy, revealed extensive cellular lysis, confirming that the decrease in absorbance was due to cell lysis, Cells in the process of lysis were also observed. Rapid dissolution of chains into collections of single cocci was also a characteristic of the action of ØC2 (W) lysates on cell suspensions.

The action of lactococcal and other phage lysins on bacteria has been studied using transmission electron microscopy. The effect of ØC2 (W) lysin on Lc. lactis C10 is shown in figure 2; click on the figure for a higher resolution image. Control cells had clearly defined walls (Fig. 3) 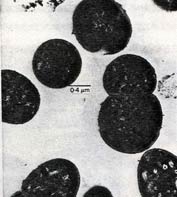 but the cell membrane was difficult to see clearly. After 150 s incubation, cells virtually free of cell wall material were visible and the cell membrane was apparent (figure 4); click on the figure for a higher resolution image. These results show that the cell wall is the site of action of the ØC2 (W)-induced lysin and that it is removed as a result of lysin action. 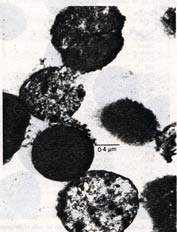 Phage lysins because of their ability to hydrolyse cell-wall linkages are being used to produce protoplasts for genetic and other studies.