You are here: Home » Bacteriophage lysins » Isolation and purification of phage lysins

Isolation and purification of phage lysins

The first stage in the isolation of phage lysin is the production of lysates containing high concentrations of phage. Because lysin concentration is correlated with phage concentration, this objective can be achieved by obtaining lysates containing >1 x 10 10 pfu/ml (Mullan and Crawford, 1985a). Information on the production of high tire phage lysates has been discussed previously. The effects of phage lysin on cells of Lc. lactis c10 is shown below. The lysin rapidly removes the cell walls resulting in cell death. 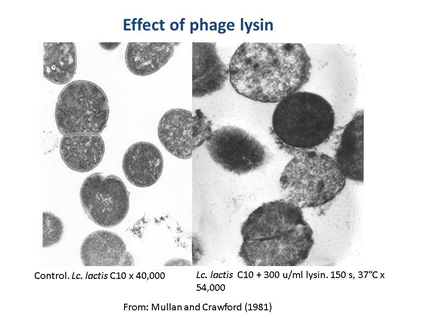 Phage-induced lysins as previously discussed are basic proteins. In an acidic environment the ionisable amino groups of such proteins acquire protons and the molecule thus acquires positively charged -NH+3 groups. Under suitable conditions the -NH+3  can be bound by cation exchange resins and protein isolation, and ultimately, purification achieved. In practice, weak carboxylic resins containing carboxylic acid exchange groups on a micro-reticular acrylic polymer have been widely used because basic enzymes can be eluted under 'mild conditions' (increasing the pH and/or ionic strength of eluant buffer), which avoid denaturation (Mullan and Crawford, 1985b).

Pre-treatment of lysates prior to ion exchange chromatography may be necessary. Some lactic acid bacteria secrete basic peptides and polypeptides into growth media and unless removed these may compete with lysin for binding sites on the ion exchange resin. The author found that Lc lactis C2 produced gram quantites of a nisin-like material that bound reversibly to Amberlite CG50 (Mullan, 1982).

Significant further purification can be obtained by applying gel filtration to the active fractions obtained from ion exchange chromatography.

Further purification and concentration can be obtained using ultra filtration (Mullan, 1982; Mullan and Crawford, 1985b). Some phage lysins can be described as 'sticky' materials, so care must be taken in choosing chromatographic and membrane media that they do not bind lysin.