You are here: Home » Starter cultures » Use of starter concentrates in fermented dairy product manufacture

Use of starter concentrates in fermented dairy product manufacture

What are starter concentrates?

Traditionally 'bulk starter' in liquid form was used to inoculate the milk used in the manufacture of cheese, yoghurt, buttermilk and other fermented products. Over the past 15-20 years, the use of starter cell concentrates designated as either Direct Vat Set (DVS) or Direct Vat Inoculation (DVI) cultures are increasing being used, particularly in small plants, to replace bulk starter in cheese manufacture.  DVI / DVS cultures for cheese manufacture normally contain defined blends of lactococci and Streptococcus thermophilus. These organisms respond different to salt and temperature and these differences, if not understood, can impact on cheese quality.

Note that the terms DVI and DVS are used interchangeably although particular culture suppliers will tend to use only one term.

Starter concentrates used in DVI cultures are concentrated cell preparations containing in the order of 1011-1013 CFU/g. They are available as frozen pellets (fig. 1) or in freeze-dried granular form (fig. 2).

Under normal conditions starter growth in milk results in a cell concentration of about 109 CFU/ml. Growth of starters in milk is limited by a number of factors including the accumulation of lactic acid. Concentrates can be produced by neutralisation (traditional fermentation technology) or removal of the lactic acid (using diffusion culture), recovering the cells by centrifugation, not required if diffusion culture is used, and by maintaining starter activity by freeze drying or freezing. Freeze-dried concentrates can be stored for some months at 4° C. Frozen concentrates are usually stored at -45° C or lower. Some suppliers recommend that their frozen DVI cultures are stored at -18° C.

If the pH is maintained in the region 6.0 - 6.3 by neutralisation of the lactic acid produced by the starter bacteria then the cell population can be increased about 10-100 fold depending on the neutraliser used. Both sodium hydroxide and ammonium hydroxide have been used, use of the latter results in higher cell densities.

The cessation of growth of starters grown in fermentation media under pH control is due to several factors including the accumulation of inhibitory concentrations of:

Higher cell densities (greater than 1010 CFU/g) can be obtained by harvesting the cells from the fermentor medium by centrifugation, to give a starter population of 1011 - 1012 CFU/ml. Even higher cell densities can be obtained by freeze drying the 'sludge' obtained by centrifugation. Unfortunately, the increase in cell population for some strains does not necessarily parallel the increase in the ability of the concentrated culture to produce acid. These strains are susceptible to damage during the fermentation, centrifugation and freeze-drying/freezing and storage stages.

An alternative method, which is not being used commercially for producing concentrates and does not require centrifugation, diffusion culture, has been described (Osborne, 1977). The culture medium, containing starter bacteria, is pumped across a suitable membrane. Membranes are now available that can withstand heat and chemical sterilisation. The metabolic by products 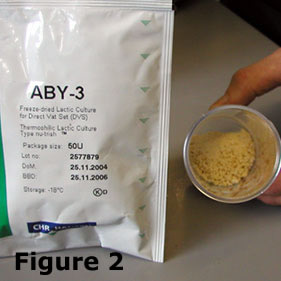 diffuse across the membrane into fresh medium that is pumped across the other side of the membrane. The major factor determining the effectiveness of this method is the provision of a sufficiently large membrane area to permit adequate diffusion of the rapidly produced metabolic by products. Osborne (1977) has indicated that 5 cm2 of membrane per ml of fermentation medium are required, together with a fermentor to culture reservoir volume ratio of 1:15. This method is capable of giving very high cell densities.

The following advantages have been claimed for the use of concentrates in cheese factories:

• Centralised concentrate production enables a manufacturer to establish a team of technical experts and to develop the necessary technology and protocols to produce a quality product.

• Concentrates can be produced at a central site, which is located at a place distant from cheese manufacture thus avoiding the hazards of phage infection due to phage-leaden whey aerosol particles in the environment.

• Detailed quality control tests can be performed on each batch of concentrate and, in theory at least, only batches meeting the manufacturer's specification are released for factory use.

• No incubation or sub-culturing is required at the factory. This reduces the probability of phage or other forms of contamination occurring since all the factory-staff have to do is to thaw the concentrate or open a packet of freeze-dried concentrates and add it to the bulk starter milk or to the vat milk.

Facilities available for the aseptic inoculation of concentrates into bulk starter tanks are generally poor, in my view. In some factories, staff remove the lid or cover of an inoculation port and pour in the cell concentrate. When doing this, the operators often wear sterile gloves and attempt to use alcohol or hypochlorite to sterilise the culture container before inoculation. When this is done in a specially designed room, downwind of whey aerosols and under positive pressure using filtered air, the probability of phage infection occurring is minimised. Some factories that use the Lewis method 'aseptically transfer' thawed culture from a 'fish can' to a sterile hypodermic syringe and inoculate the bulk starter vessel through a hypochlorite solution in the usual way. Ideally, starter suppliers should supply concentrates in a form suitable for aseptic inoculation. For example, they could be supplied pre-packed in syringes .

• Not all starters respond well to the operations involved in concentrate production and/or storage. This fact limits the number of strains suitable for concentrate production and can create some difficulties for starter suppliers and factory laboratories in compiling rotations of phage unrelated strains. This reduction in the numbers of strains also results in a more limited choice of starters that have the potential to produce good flavour in mature cheese. To some extent this has prompted the development of adjunct cultures, some of which may be used to enhance or even balance flavour in mature cheese.

• Low temperature storage facilities are required for frozen concentrates at the production point, during transit to the factory and at the factory. Power cuts and distribution problems could obviously present difficulties. Some of these difficulties have been overcome by the development of freeze-dried concentrates.

• Although concentrate suppliers perform quality assurance on their products, starter suppliers generally offer only limited guarantees of concentrate quality. In other words, if a contaminated concentrate is used and an inferior quality cheese results, or worse, there may be difficulties in getting the starter supplier to accept liability for all the resultant economic loss. In fact, most starter suppliers recommend that concentrates should be pre-tested at the factory before their use in cheese manufacture. Consequently, a decision to replace the mother and the intermediate stages of bulk starter manufacture with concentrates should be based on the knowledge that the responsibility for starter quality has been taken from the factory laboratory and belongs to the starter supplier. However, the accountability in the event of problems related to the starter may not have been fully transferred to the supplier. For these reasons factories using concentrates should ideally take representative samples from each batch of concentrates and pre-test them before cheese and other ferment products manufacture. Factories lacking the facilities to do this should take samples and in the event of problems and send concentrate samples unopened, packaged properly and refrigerated to an independent laboratory for analysis.

• Use of DVS cultures is expensive compared with bulk starter manufacture. This is particularly so when the costs of modern, aseptically produced starter using pH control are considered. The costs are well understood but this statement is only valid where companies have well designed bulk starter facilities, qualified staff and good quality assurance laboratories. In the absence of this combination, the economic losses resulting from poor-quality cheese, means that use of DVI cultures is the logical choice for many small to medium sized processing units.

• Changes to the cheese making process are usually required. Addition of traditional bulk starter to cheese milk results in a drop of 0.1 to 0.2 pH units. This small drop in acidity has significant even if subtle effects on subsequent proteolysis in the cheese, and has an effect on coagulation. In addition, the culture starts producing acid virtually immediately. With DVS cultures, there is no drop in acidity and there may be a lag period before the cultures commences growth and acid production. Consequently, small adjustments to the traditional cheese making process are usually required to maintain cheese quality.

DVI / DVS cultures contain variable (known and controlled by the manufacturer) concentrations of Str. thermophilus. Strains of this organism respond differently to temperature and salt than lactococci. These differences are important and if not understood can have detrimental effects on cheese quality.

Lactococci will produce acid during salting, pressing of the curd and the initial stages of ripening until the salt in moisture (S / M) in the cheese approaches 6 %. This can take several weeks. Acid production continues slowly at quite low temperatures, < 8°C, until the S / M limit is reached.

Strains of Str. thermophilus are particularly sensitive to salt and acid production is inhibited once the S / M value exceeds about 2%. Little acid production occurs after the cheese curds cools below about 22°- 25°C and effectively stops at around 15°C.

What does this mean in practice? Cheese makers are reliant on the lactococci in the curd to utilise residual lactose, produce lactic acid and reduce the pH during pressing and the early stages of ripening. Late phage infection can destroy the lactococci and should be considered when investigating high pH cheese (>5.3 at 24 h after manufacture) and "curdy cheese".