You are here: Home » Starter cultures » Inhibitors of starter activity in milk

Discovery of bacteriophages for lactococci

Prior to the early 1930's most cheese was made from undefined starter cultures; species and strain composition were generally unknown and if known initially would change with each subculture.

Dr Hugh Whitehead and his colleagues at the New Zealand Dairy Research Institute realised that if the dairy industry in that country was to produce close-textured cheese, free from taste and body defects and manufactured within a consistent time period that it would be necessary to use standardised starter cultures. They also realised that they needed to prevent problems arising from the growth of 'wild' lactic acid bacteria and spoilage organisms in the raw milk and introduced pasteurisation of milk for cheese manufacture. 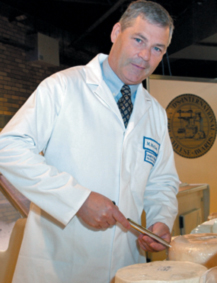 Characteristics (Denomination of Protected Origin 1 July 1996) - Robiola di Roccaverano is a fresh cheese produced from ewes’ or goats’ milk or a mixture of ewes’, goats’ and cows’ milk. The quantity of cows’ milk used in manufacture must be less than 85%. Robioladi Roccaverano cheese is cylindrical with flat surfaces. The cylindrical shape has a diameter of 10-15 cm, an edge of 4-5 cm and a weight of 250-300 g. There is no rind and the dough is white or ivory-white without holes. The texture is soft and slightly firm. The odour is fine, delicate, and rarely pungent. The taste is mainly acid and fine.

How do you investigate and solve commercial yield problems?

This section of the Dairy Science and Food Technology website provides an outline of how the commercial 'cheese yield problem' outlined earlier might be approached and how yield and cheese component retention can be analysed and presented. This is achieved using a unique on-line calculator that is shown in the cheese yield spreadsheet.

Data from 5 vats of commercial Cheddar production are summarised in the cheese yield spreadsheet. The data set are different to the problem given previously. The cheese and milk data were obtained from one day's production. The casein:fat ratio of milk in each vat has been calculated and for information casein as a percentage of protein has been presented.

MAP has the potential to increase the shelf life of a number of dairy products.  These include fat-filled milk powders, cheeses and fat spreads.  In general these products spoil due to the development of oxidative rancidity in the case of powders and or the growth of micro-organisms, particularly yeasts and moulds, in the case of cheese.

The nature of polyphosphate

Inorganic polyphosphate (polyP) is a linear, unbranched polymer of orthophosphate residues linked by phosphoanhydride bonds (Figure 1.1).  PolyP ranges in size from three to over one thousand orthophosphate residues (Kornberg et al., 1999).  PolyP is widespread in bacteria and yeasts and has been found in plant and animal cells (polyP is also formed by dehydration and condensation of phosphate at the elevated temperatures of benthic and volcanic vents (Kornberg et al., 1999).

PolyP was first found in yeast cells by Liebermann (1888). Further work by Wiame (1947), Kornberg (1956) and others through the 1940s and 1950s established the role of polyP, or 'volutin' as it was then known in the accumulation of phosphate and in energy storage by microorganisms. PolyP was observed in many microorganisms as metachromatic particles and was historically used as a diagnostic tool for certain pathogens such as Corynebacterium diphtheriae (Robinson & Wood, 1986). PolyP, like other anions, shifts the absorption of basic dyes such as toluidine blue, to a shorter wavelength (630 to 530nm) therefore giving rise to a metachromatic effect. When viewed by electron microscopy intracellular polyP appears as dark, electron dense granules. The presence of polyP in cells may also be detected by other techniques such as 31P-NMR analysis (Glonek et al., 1971) and by fluorescence of 4-6-diamidino-2-phenylindole (DAPI) (Allan & Miller, 1980).

This article provides students with an overview of why employers are increasingly attempting to recruit graduates with entrepreneurial skills. It also explores why economies within the European Union need more people with imagination and drive to think and act in an entrepreneurial manner to create exciting opportunities for themselves and others. Entrepreneurship is not something special that a few people are born with. Entrepreneurship is a way of thinking that can be nurtured in any environment, not just business start-ups but also in existing private and public organisations. Therefore, it is not surprising that schools and colleges are interested in producing more enterprise-savvy graduates; and governments are committed to equipping people with enterprise skills in all walks of life. This article outlines how important it is for everyone to cultivate his or her entrepreneurial spirit.

There are a range of formulae that can be used to assess the readability of written text.  While these all have limitations, judicious use of several ‘readability' predictors can improve the clarity of writing of articles, theses, reports and assignments.

The software used here, an online readability calculator, will return a number of indicators including the average words per sentence, Fog index, Flesch reading ease score, and Flesch-Kincaid grade level. These readability indicators may be of help in editing and developing your written work.

It is unclear how useful computer programmes are for analysing scientific writing since the language used tends to be complex. However, some studies have shown that the indicators derived using the software here do have value.

The LP system can be used to prevent bacterial deterioration of milk when refrigeration is not available.  It can also be used to prolong the safe storage life of refrigerated milk.  Arguably the LP-system, immunoglobulins and lactoferrin have potential to be of value in neonate nutrition.  The remaining section largely concerns the exploitation of the LP-system in the protection of neonates.

That milk provides neonates with nutrients and  various protective antimicrobial factors has been discussed previously.  Because many of these factors are denatured by the heat treatments used in milk replacer manufacture commercial products, unless specially produced, generally do not contain antimicrobial proteins in active form.