Webinar. Trends in detection of adulterants in milk and ghee

Characteristics - (Denomination of Protected Origin 1 July 1996) -Bra Duro is a cylindrical cheese with a diameter of 30-40 cm that has a convex edge of 7-9 cm and a weight of 6-8 kg.  The ripening lasts at least 180 days.  The crust is hard,regular with a dark beige colour.  The cheese is yellow-ochre in colour with small and sparse holes.  The cheese has a hard solid texture and has an aromatic odour with almond characteristics.  The taste is very savoury and mainly salty. 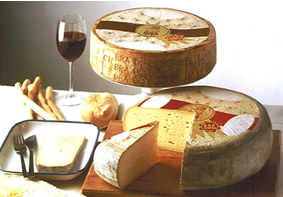 Production area- The geographical area of production is the entire province of Cuneo.  The ripening area includes the Villafranca Piemonte town in the province of Turin.  If the Bra Duro is produced in the mountain area of the province the cheese can be named "di alpeggio" (from mountain pasture).

Cheesemaking - Bra Duro is produced with partly skimmed raw or pasteurised cows' milk.  Ewes' or goats' milk may also be added.  The milk is coagulated by the addition of bovine liquid rennet at a temperature of 27-32° C.  When pasteurised milk is used, a commercial starter generally made with a mix of thermophilic and mesophilic lactic bacteria is used.  Generally, each producer uses a different starter to characterise their production.  The curd is cut twice to produce granules with the size of rice grains.  After draining, the curd is put in moulds and pressed for at least 5-6 hours.  The cheese is then dry-salted (three days per side).

Composition - The composition of Bra Duro cheese is given in table 2.