Characteristics - Murianengo is a typical Piedmont cheese also known as ‘Moncenisio’ with cylindrical appearance and flat surfaces. The cylindrical shape has a diameter of 25-35 cm, an edge of 10-20 cm and a weight of 8-10 kg. Ripening lasts at least 90 days but frequently is longer than 200 days. The crust is wrinkled, hard, reddish-grey with yellow and white highlights. The dough is ivory-white or dark-yellow with small holes. In ripened cheese, greenish-blue veins due to mould growth are present. The texture is hard, compact and very friable. In fresher cheeses, the odour is fine and delicate, becoming very strong and persistent in aged products. The taste is mainly sweet and fine but savoury, salty and intense in aged products. 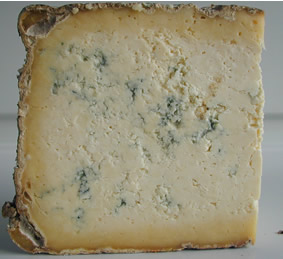 Cheesemaking - Murianengo is produced only with raw cows’ milk. There are two cheesemaking techniques. In the first the milk is left to sour at room temperature for 12 hours. It is then skimmed and added to the same quantity of fresh raw milk. The mix is then coagulated by the addition of bovine liquid rennet at a temperature of 33-35° C. Starters are not used. After 40-60 minutes, the curd is cut to produce granules with the size of rice and collected with muslin. Then the curd is left to sour at 20-22° C for 24 hours, put in moulds and pressed for at least 2-3 days. The cheese is then dry-salted (three days per side). After 20-25 days, the shape is punctured for each face to allow the air entry in the dough and the mould growth as for Gorgonzola.

In the second technique known as ‘two dough’, the fresh curd is put in moulds then cut into discs 8-10 cm thick. These discs are submerged in whey for 48 hours at 20-22 °C then added to fresh curd and carefully crumbled. Generally, the two curds are mixed in the ratio of 1 to 1. The minced curds are salted, put in moulds, pressed for at least 1-2 days and left for 48 hours at 20-25 °C. The ripening is similar for the two type of cheese.

Composition - The composition of Murianengo cheese is given in table 14.