Commercially, cold-filled acidic pickles, sauces (e.g. salad cream, mayonnaise), and food dressings are preserved, and their microbiological safety and stability are assured, by the use of acetic acid, salt (NaCl), and sugar. This article provides an overview of a preservation model and access to the model to enable the effect of sauce components and pH to be investigated.

A safe product has been defined as one which is so formulated that when an inoculum of viable cells of Escherichia coli is  added to the product this is reduced by 3 log cycles in less than 72 h. Products exhibiting this level of antibacterial activity have a CIMSCEE safety value (Σs) of greater than 63. Σs is calculated using equation 1. A microbiologically stable product is one that will not support microbial growth at ambient temperature and has a Σ value of greater than 63. Σ is calculated using equation 2.

The term water phase value refers to the value of an ingredient as a % of the sum of all the ingredients including water.

The value (1 - ɑ) represents the proportion of acetic acid which is undissociated, this is dependent on a number of factors but principally on the pH of the aqueous phase of the product; using the pKa (4.76 at 25°C) for acetic acid and the pH of the aqueous phase, (1 - ɑ) can be calculated using the Henderson–Hasselbalch equation, equation 3, where pKa is the negative logarithm of the ionization constant (K) of the acid, this is the pH of the solution in which half of the acid molecules are ionised. Note that the pKa value is not an absolute one; it will vary with the ionic strength of a solution so salt addition for example will change the value.

Equation 3 can be simplified and rearranged to give:

(1 - ɑ) can then be calculated using e.g. a spreadsheet.  Using Excel, the data can be entered as

where pH and pKa are replaced with their numerical values or appropriate spreadsheet cell references. This is also shown in the Excel graphic.

Using equation 1 a technologist can adjust the formulation of cold-filled acidic pickles, sauces and food dressings to obtain a desired CIMSCEE value by varying e.g. the concentration of acetic acid (which will also affect the pH), salt and sugar in the product.

The CIMSCEE model is based on the work of Tuynenberg Muys (1971).

Readers can evaluate the model using the free calculator on this site.

An Excel spreadsheet (all field unlocked) can also be securely downloaded for a very small contribution (£5) towards the runnuing costs of this website. 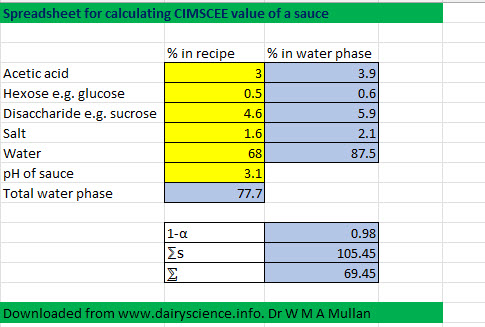 The undissociated acid is understood to readily pass through the cell wall of microorganisms and in the relatively high pH of the cytoplasm, dissociates into hydrogen and acetate ions. The accumulation of hydrogen ions results in the internal pH of the cytoplasm dropping, damaging essential enzyme systems and ultimately causing cell death. The acetate anion may also exert antimicrobial effects.

Casey and Condon (2002) have shown that adding NaCl to broth containing E. coli and acetic acid results in the pH of the cytoplasm of E. coli increasing; this may be the explanation for the acid protective effect experienced when salt is added to an acidic food product.

Limitations of the CIMSCEE model

Products with Σ values >63 are generally regarded as microbiologically stable at ambient temperatures. However, if they had been contaminated with the mould Moniliella acetoabutans, which can tolerate high concentrations of acetic acid, they will spoil; Moniliella acetoabutans can utilise acetic acid as a carbon source. Control is at the production level where this mould must be eliminated from the environment.

Modern commercially produced acidic sauces and dressings produced using acetic acid are not high-risk vehicles for food poisoning and have a good safety history. However, there has been at least one outbreak of Escherichia coli O157:H7 associated with mayonnaise and mayonnaise-based dressings (Weagant et al. 1994). This along with observations by several researchers that E. coli under certain circumstances can persist for significant periods in products produced using acetic acid has led to a number of investigations of the survival of  E. coli in these products and indirectly on the utility of the CIMSCEE safety value for assuring consumer safety.

These studies have identified that the model may give false positives (survival predicted when experimental data showed death) when tests are undertaken at temperatures of 30°C (Chapman et. al., 2006). More importantly, work has identified that Escherichia coli including VTEC strains can survive for days and in some cases many weeks when mayonnaise is held at low temperatures.

It is clear that the absence of a temperature dependant variable is a weakness in this model; the antimicrobial effects of acetic and similar organic acids tend to increase with temperature.

Other work has revealed that the CIMSCEE model gave false negatives (predicted death when survival occurred) when particular salt and or sucrose combinations were tested e.g. when the salt concentration was > 2.5% and/or when the sucrose concentration was > 4%, resulting in the suggestion that the model fails to take interactions between salt and sucrose into account (Chapman et. al., 2006).  Note the protective effects of salt and/or sugar for E. coli exposed to low pH have been found by others (Casey and Condon, 2002; McKellar et. al., 2002).