Microbial testing is still important but it is critical to understand its limitations in assuring food safety.

Despite the global use of HACCP systems and a legal requirement for the use of HACCP in many jurisdictions' food poisoning remains an endemic problem and large numbers of people continue to be hospitalised, die and as a result companies either face substantial legal costs and / or in many cases are forced to cease trading.

While the use of HACCP systems significantly reduces the need for microbiological end point testing of foods, sampling schemes and microbial analysis have important roles in system validation and quality assurance. This article also provides access to three free On-Line calculators that enable the probability of detecting a pathogen in a food, the number of samples required to test to meet a food standard and how to calculate the prevalence of a pathogen when all the samples taken for testing return negative results.

This raises an issue concerning the adequacy of sampling schemes and microbial analysis in commercial food manufacture.

In September 2015 the US Centers for Disease Control and Prevention reported on a multistate outbreak of listeriosis allegedly caused by Mediterranean-type soft cheeses. Some 30 people were affected, twenty-eight people were hospitalized and three deaths were reported. However, listeria were not isolated from the cheeses produced by the manufacturer concerned.

The rejection of infant milk powders contaminated with Cronobacter sakazakii  by Chinese regulatory authorities has clearly shown significant limitations in "approved" sampling schemes operated by major companies in both Europe and the US.

In sampling methods we ideally want to obtain a high level of certainty that we can detect pathogens and other organisms. Normally we want to work with a 95% level of confidence.

So, how reliable are sampling schemes for detecting microorganisms in foods and how many samples are required to give meaningful results when validating a new process?

Let's say we want to calculate the probability of detecting a pathogen or fault causing microorganism present at a concentration of 2 organisms per kilogram in a food and we assume that the organism is uniformly distributed- frequently not the case -to make the mathematics easy and that 10 random samples of 25g are taken for analysis. Note, the use of 10 random samples of 25 grams to test a complete production batch of some foods is not uncommon.

To calculate the probability we first need to calculate the total number of potential sample lots, this is obtained by dividing 1000 (grams in a kilogram) by 25 (weight of sample). This gives 40.

We know that there are organisms in 2 sample lots.

This low probability of detection is some way from the desirable 95% confidence level that is frequently used when working with pathogens and spoilage organisms!

The above example is indicative of a pathogen being distributed homogeneously and is close to an ideal situation. A more practical way of describing bacterial populations in foods is to mathematically describe how they are distributed. A number of distribution models are used including the binomial, Poisson and log-normal distributions.

The Poisson Distribution is particular useful in working with homogeneous populations. With this distribution, the probability of finding at least one sample positive for a pathogen can be described using equation 1.

Where p is the probability (%), e is a mathematical constant and is the base of natural logarithms with a value of 2.7183 to 4 decimals, c is the concentration of bacteria per gram or mL, n is the number of samples and s is the sample weight or volume. In addition to the concentration of bacteria, in situations where bacteria are distributed homogeneously,  it is the total mass of sample (n x s) rather than the number of samples that influences the probability of detection.

I have programmed a calculator using the Poisson Distribution to explore the relationship between the number of microorganisms actually present in a food, the number of samples taken and the weight or volume of the samples on the probability of detection. For example, by keeping the number of samples, and the sample weight constant the effect of contaminant numbers on the probability of detection can be investigated, try 10 CFU/kg. By doing this, it is apparent that the sampling regime required to give a high degree of confidence in detection is dependent on the total mass or volume of sample. As the total mass or volume of samples increase it becomes easier to detect pathogens and fault-causing microorganisms with higher levels of confidence. It should be apparent in this type of situation you could take fewer samples of larger weight or volume and obtain the same level of assurance.  However, ideal situations like this are now understood to be less common than originally expected.

In this case we have also assumed that we can detect the organism being investigated. Modern PCR techniques can give almost 100% detection in many cases, however, this is not true for traditional microbiological plating methods. So the odds of detection will be even lower!

Contaminants are frequently not distributed uniformly in food. The spatial distribution of bacteria in food is being increasingly studied and evidence is accumulating that clusters or aggregates of microbial cells are common. Fractionation and mixing effects in particular can markedly affect the distribution of microorganisms. The detachment, or sloughing, of cells from biofilms on e.g. pipelines, heat exchangers, stainless steel surfaces in general can generate significant clusters of bacteria periodically during production processes. Some internationally approved sampling systems were not originally designed to detect these periodic microbial 'spikes' and updated sampling systems are required to allow for these probabilities.

Examples showing typical spacial distributions are given in Figure 1.

Figure 1. Examples of spacial distributions of microorganisms in foods. Adapted from Bassett (2010).

The illustration from Bassett (2010) shows how 100 cells could be distributed over 25 units of a food.  Microbial sampling for regular and random microbial distributions is relatively straightforward. This not the case where cells are clustered. In this situation in Figure 1, 17 of the 25 units contain no cells, 2 have 1 cell, 4 have low numbers of cells and 2 have high concentrations of cells. This distribution is known as a contagious distribution. Note that there are many different variations of this distribution. It is this latter situation where the infective dose is greatly exceeded after consuming a portion of a unit from a consignment of a food that is particularly concerning. Consider a situation in which two members of a family each drink a carton of raw milk, one consumes zero cells of Campylobacter jejuni and the other a cluster of 60 cells. It is highly probable that the latter will be severely ill yet the farmer could have sampled 17 cartons of milk without finding a pathogen.

Model probability of detecting a pathogen in food using the Poisson Distribution.

So, simply taking a number of random samples of e.g. milk powder and testing for a pathogen would have a very low probability of success. The probability can be significantly improved by taking larger numbers of samples. In the case of milk powder a continuous sampler (Figure 2) should be used to take multiple samples over the production period. 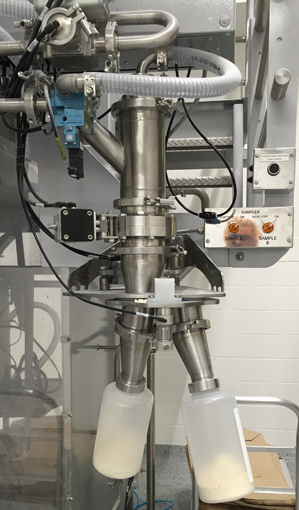 Figure 2. An automated Technopak sanitary milk powder sampler. The sampler can be controlled using PLC/HMI or plant IT controls.

The economic and public health significance of clustering is well illustrated by the meticulous work of Jongenburger et al. (2011). These workers investigated why a consignment of powdered infant milk formula (PIM) produced in Europe (the batch of approximately 22,000 kg was produced in 3 shifts between 04:00 and 24:00 h in January 2007) was rejected because of contamination with Cronobacter spp. by the importing Chinese authorities. The Dutch-researchers sampled 31 bags (Table 1) close in production time to the bag that tested positive for Cronobacter spp. in China using 2290 samples and found 8 positive samples from 3-bags.

Table 1. The concentration Cronobacter spp. (CFU/g) as estimated in 31 bags of the recalled batch by direct plating of 0.3 g in TSAP. The detection limit was 3.3 CFU/g.

Interestingly, one sample contained 560 CFU/g of Cronobacter spp that if consumed would have had the potential to cause serious illness.

This research illustrates the extensive sampling required to detect pathogens and fault-causing organisms present in clusters in foods and the difficulty in using sampling and microbial enumeration to assure food quality. The magnitude of the work required to confirm the Chinese results also shows how difficult it can sometimes be to confirm epidemiological indications that a particular food is the source of say food-poisoning by a Salmonella spp. or other pathogen by enumerating the pathogen present at low concentration in a suspect food.

Calculate the number of samples required to meet a microbial standard

Let’s take a situation where a manufacturer must meet a standard for a powdered product that must contain less than 1 viable cell of C. jejuni in 200 g. How do we calculate to a probability of 95%, how many 10 g units should be sampled to detect a level of contamination of 1 cell per 200 g of powder?

Hence the specification requires there to be less than 1 organism in the 20 sample units. This is equivalent to a % defect rate of

Next, we convert the % value to decimal to give the detection probability that we require, in this case, Pdef =0.05.

The number of samples can be calculated using equation 2

The 58.404 is rounded to 59 to give the number of samples required. This calculation can easily be done using Excel.  The Ceiling function can be used to round to the next whole number.  The author has provided a free calculator at  www.dairyscience.info/newcalculators/sample-no.asp that enables  Pdef  to be calculated and the number of samples.  The author has made the code for this calculator freely available.

Calculate the number of samples required to meet a microbial standard.

Assuming that all the samples taken for testing are negative, what might be the probable prevalence of a pathogen or fault-causing organism in a food?

Let's consider the prevalence of Salmonella  spp.  in raw milk in a farm bulk tank. Assuming that the 5 x 25 ml samples of milk give a negative test for salmonella can we estimate what the maximum prevalence of salmonella might be in the milk?

The probable upper limit of contamination dˆis given by (equation 3)

Where where 1 − α is the probability that test samples may be contaminated with salmonellae and n is the number of samples. To determine the probable prevalence of salmonellae in 1 L  of milk , dˆ is by multiplied by 1000 and divided by the sample weight. This gives a value of 18 CFU/ L (Table 2). I have provided a calculator that enables prevalence to be calculated.

Calculate the prevalence of a food poisoning organism in a food

Since it is likely that some, perhaps all, of these organisms may be in clusters (Mullan, 2019) it is possible that an unlucky consumer could drink a carton of milk from a bulk tank that had tested negative for salmonella (1 negative, 25 ml test) and still ingest an infective dose. Hence the critical importance of using HACCP and a "kill" control" equivalent to pasteurisation.

Hoelzer, K. and Pouillot, R. (2013). Practical considerations for the interpretation of microbial testing results based on small numbers of samples. Foodborne Pathogens and Disease. 10, 907-915.

Mullan, W.M.A. (2019). Are we closer to understanding why viable cells of Mycobacterium avium subsp.paratuberculosis are still being reported in pasteurised milk? International Journal of Dairy Technology, 72, 323-344.

Zwietering, M.H. and den Besten, H.M.W. (2016). Microbial testing in food safety: effect of specificity and sensitivity on sampling plans — how does the OC curve move. Current Opinion in Food Science. 12, 42-51.

The author acknowledges helpful discussions with Professor Marcel Zwietering, Dr David Kilpatrick, Dr Colin Weatherup and Mr Tony Duffy. All views expressed are those of the author as are any errors in this article.

The image of the Technopak sanitary milk powder sampler is copyright of Technopak Ltd, Auckland 2013, New Zealand  and is used with their permission.