You are here: Home » Ice cream » Start your own ice-cream business

Webinar. Trends in detection of adulterants in milk and ghee

How do you get the sweetness of ice cream or gelato just right?

Ice cream and gelato manufacturers produce products with a range of favours. There are often significant variations in sweetness and hardness between flavours. This article provides an explanation of sweetness, how it is measured and how it can be controlled.

Relative sweetness and the Potere Dolcificante method are discussed and calculations are used to explain the differences. The limitations and disadvantages of using numerical values of sweetness are explained. Since sweetness and hardness are closely related the reader is also referred to the article on controlling hardness or resistance to scooping.

The Potere Dolcificante method for calculating the relative sweetness of ice cream.

Why use the Potere Dolcificante method for calculating sweetness?

Ice cream can contain a wide range of sucrose concentrations, typically ranging from 8% to around 20%. Because sweeteners other than sucrose can be used it is usual to express sweetness of ice cream, as relative sweetness (also known as theoretical sweetness); sweetness of individual sweeteners is expressed relative to sucrose which has a reference value of 1.

While relative sweetness is widely used in commercial ice cream production the determination of sweetness is largely subjective, so sweetness is not a precise scientific term.

Sweeteners differ in the quality of sweetness and the intensity of taste produced. Sucrose is an ideal sweetener in that it maintains a pleasant taste over the concentration range used in ice cream. The sweetness of fructose is perceived earlier than glucose or sucrose, it quickly reaches peak sweetness and the sweetness fades faster than sucrose.

Relative sweetness also ignores sweetener interactions and the subjective assessment of taste panellists and consumers.  While the limitations of relative sweetness are well known scientifically these not always well understood in commercial ice cream production. Examination of the literature indicates significant variation in reported values for the relative sweetness of sugars and syrups.

Nevertheless, relative sweetness is still a useful product development tool providing its limitations are understood. Useful sources of data on sugars and syrups can be obtained from Nickerson (1974); Pancoast and Junk (1980); Jiménez-Flores et al. and Hull (2010). Note the differences in relative sweetness reported by these authors (table 1). These values are typical of the data in the literature and indicate the variation  in the reported relative sweetness of sweeteners.  This is not surprising because of the reasons discussed previously.

Consequently relative sweetness values should be used with caution and as a guide when trying to produce ice cream of consistent sweetness.

Glucose syrups are typically produced from maize starch by acid hydrolysis. Their sweetness and other properties depend on the extent of hydrolysis. Sweetness is expressed relative to dextrose (glucose) and is defined as Dextrose Equivalent (DE).

The DE is defined as the percentage of reducing carbohydrates present in the syrup, compared with the total quantity of oligo-saccharides (Hull, 2010). Syrups with high DE values are sweeter than those with lower values.  The composition of some corn syrups used in ice cream is given in table 2.

Table 2. Composition of some glucose syrups used in ice cream.

These calculations will be illustrated using examples.

If the manufacturer decided to reduce cost by reducing the sucrose concentration then a combination of other sweeteners could be used to give an equivalent relative sweetness. This works fairly well providing it is only the sweetener ingredients that are changed. However, if glucose, fructose or high fructose syrups are used they may significantly depress the freezing point depression (FPD) of the mix resulting in softer ice cream. FPD is discussed in the article on the science of Goldilocks ice cream.

While the DE value provides an approximate estimate of sweetness, relative sweetness values provided by the manufacturer of the syrup should be used if available.

Manufacturers must also be aware of regional preferences and adjust relative sweetness to meet these needs e.g. people in the South of Italy prefer slightly sweeter gelato to those in the North (Filippo Zampieron, personal communication).

The Potere Dolcificante method for calculating the relative sweetness of ice cream. 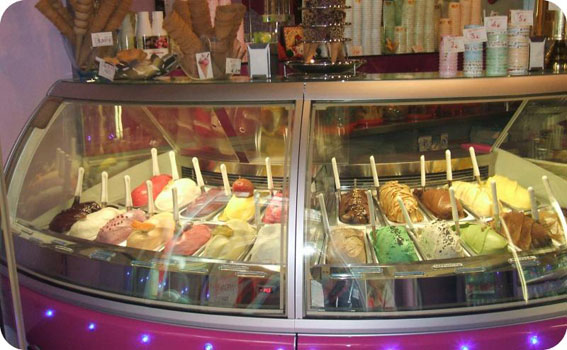 A similar method "Potere Dolcificante" (POD) or measure of sweetness is used in Italy and some other continental European countries. POD values differ from relative sweetness values in that the sweetness due to lactose is included.

Why use the Potere Dolcificante method for calculating sweetness?

If an ice cream producer is not changing the mix ingredients that add MSNF and simply replacing sugars it can be argued that traditional relative sweetness calculations should be adequate for product development purposes.

However, if the lactose concentration of the mix is going to change then there may be a case for including lactose in relative sweetness calculations. This will be explored further.

Holsinger (1999) has emphasised that lactose is relatively sweeter at higher concentrations than at lower concentrations and is sweeter than is usually reported in reviews of food applications.

The initial concentration of lactose in ice cream is usually in the range 9-10 g/100g water (Marshall et al., 2003). This is approximately equivalent to around 3% sucrose (based on graphical analysis of the data in table 3). Due to freeze concentration the lactose concentration in extruded ice cream (around -6°C) approximately doubles to 18-20 g in 100 g water and increases further to 27-30 g in 100 g water in ice cream held at -10°C. Nickerson’s data suggests that 20% lactose and 30% lactose solutions have relative sweetness values of around 8% and 20% sucrose.

This analysis suggests that lactose has the potential to make some contribution to the sweetness of ice cream and may provide an explanation of why continental European ice cream makers include lactose in sweetness calculations.

Again POD is simply a tool for measuring sweetness. It has similar limitations to relative sweetness and manufacturers will have to adjust POD vales, typically ±15-20% (Filippo Zampieron, personal communication) to ensure that certain flavours have similar sweetness when eaten to standard or reference flavours. Spreadsheets can be downloaded from this site enabling calculation of the relative sweetness and POD values of mixes.