You are here: Home » Ice cream » How do you get the sweetness of ice cream or gelato just right?

In this article we will explore how to use mix composition to control the hardness or "scoopability" of ice cream or gelato. The serving temperature which influences the concentration of ice present will also be considered. The volume of air added during freezing (overrun), the manufacturing process and the concentration and type of emulsifier can also affect hardness.

However, these effects are generally less significant than the concentration of sweeteners used and serving temperature. This article should be read in conjunction with the article on the sweetness of ice cream. A condensed version of this article is available in the Food Science and Technology OnLine Journal (Mullan, 2018).

There is an extensive range of flavoured ice creams (Plate 1) however there is frequently a marked difference in hardness between flavours, e.g. the chocolate flavour is often harder, more difficult to scoop, than the vanilla or strawberry flavours.

While it is unclear how much the consumer in the UK, or the US, is concerned with differences in hardness between flavours, and batches of flavours, gelato enthusiasts are and demand gelato of consistent and similar hardness regardless of flavour.

Plate 1. Range of flavoured gelato in a retail display cabinet in Naples, Italy.

In recent years there has been a significant increase in the number of specialist ice cream shops / parlours or gelateria. Many of these gelateria owners, particularly in continental Europe, require ice cream or gelato that is of consistent sweetness and resistance to scooping, also called dipping in the U.S., or more simply hardness. Consequently food technologists should have a good understanding of how to formulate an ice cream mix to control the hardness and sweetness of the ice cream.

Pure water at standard pressure (101.325 kPa) freezes at 0°C. Addition of sugar e.g. sucrose will lower the temperature at which the water freezes; the freezing point depression (FPD).

The FPD of an ice cream mix depends mainly on the number of sweetener molecules in the mix recipe and the number of milk salt ions. The number of molecules depends on the weight of the sweetener added and its molecular or formula weight. This effect can be illustrated using two common sugars, fructose and sucrose. Fructose has a molecular weight of approximately 180 whereas sucrose has a molecular weight of about 342. The FPD of a 1% fructose solution is approximately twice that of a similar sucrose solution because there is almost twice as many molecules of fructose present in the fructose solution; fructose has about half the formula weight of sucrose. This effect is shown in figure 1 and is derived theoretically in examples 1 and 2. 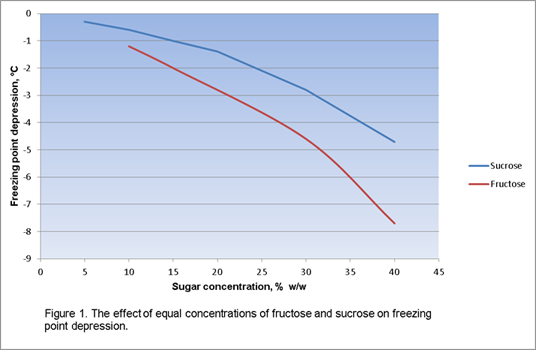 The effect of a solute e.g. glucose on the freezing point depression of a solvent e.g. water can be calculated in dilute solutions using equation 1.

We will now illustrate use of equation 1 by calculating the theoretical freezing point depressions of 1% (w/w) solutions of glucose (Example 1) and sucrose (Example 2) in water.

This effect, the greater the number of molecules of sweetener then the lower the FPD, is known as a colligative effect and is independent of the chemical nature of the solute.

The FPD of an ice cream mix, and the hardness of the final ice cream, can be controlled by varying the concentration of sweetener or sweeteners added. As the sucrose concentration is increased softer ice cream will be produced. However the ice cream may become too sweet prior to the desirable softness being obtained. Alternatively part of the sucrose can be replaced with a less sweet sugar e.g. glucose, which has approximately twice the FPD of sucrose. Another option might be to use fructose that has an identical FPD to glucose (both sugars have the same formula weight) but is much sweeter than sucrose along with glucose syrup and reduce the concentration of sucrose used.

Food scientists and technologists can calculate the theoretical freezing point depression or determine the actual freezing point of ice cream mixes and construct freezing curves. These can be used to calculate the concentration of ice and unfrozen water in ice cream at particular serving temperatures and are very useful in product development. This topic will be discussed later. However, this approach is not widely used outside the larger companies that have good research and development facilities. Instead methods based on calculation of the freezing point depression factor (FPDF) of individual sweeteners in mixes are more widely used.

These calculations are based on summing the freezing point depression factor (FPDF) of each sweetener (lactose is not usually included in the US, UK and Ireland) used in the ice cream mix to give a total value that is then used for control purposes. Note lactose is included in the calculation of FPDF in continental Europe where the calculation is called Potere Anti Congelante, PAC. FPDF is not the same as the FPD which was mentioned previously and is a dimensionless number.

Ice cream manufacturers calculate the FPDF of a sweetener compared with an equivalent concentration of sucrose. Sucrose is used as a standard and allocated a value of 1. The FPDF of other sweeteners is obtained by dividing their formula weight into the formula weight of sucrose. The FPDF for a range of sweeteners is shown in Table 1. Note, manufacturers’ mean molecular weight data for syrups and maltodextrins should be used if available.

1 While this polyol has certain advantages as a partial replacer for sucrose it has a tendency to crystallise and its use can result in very hard ice cream or gelato. Erythritol crystallises in ice cream and gelato at around 8% w/w. Once 8% is exceeded regardless of its freezing point depression effect, ice cream becomes harder. Because of this it must be used in combination with other sweeteners.

Calculations illustrating how to determine the FPDF of sweeteners are shown in Examples 3 and 4 below.

Further examples are provided in a very useful book on glucose syrups by Hull (2010).

Examples of FPDF calculations used to predict the hardness of ice cream are illustrated below.

These calculations are performed by tabulating the sweeteners present in 100 g of mix, the weight of sweetener added, their FPDF from table 1 and the total FPDF of each sweetener (product of the FPDF of the sweetener and the weight added). The total FPDF of each sugar is summed to give a total FPDF value for the mix (tables 2 and 3). Lactose is supplied by the the milk solids not fat (MSNF) components and is generally excluded from calculations outside mainland Europe. The justification for doing so is that the concentration of MSNF is generally constant between mixes (and is usually outside the manufacturer’s control). On the other hand the major variables affecting FPDF are the added sweeteners; these are controlled by the product developer and are included in the calculation. However, there are occasions when the lactose concentration must be considered and there is a case for routinely including it in FPDF calculations.

The mix in table 2 has a FPDF of 15. Apart from sucrose no other sugars have been added. Note it is also advisable to calculate relative sweetness when undertaking these calculations. A mix with a FPDF of 15 will give a hard ice cream the sort of ice cream called ‘brick’ ice cream in the UK and Ireland. This brick ice cream is typically cut into slices and made into ‘sliders’ in Ireland or eaten after being scooped (with a little difficulty- the scoop is often ‘warmed’) from domestic freezers, operating at around -18 °C, into dishes. Note scooping hard ice cream can result in wrist and other injuries with the potential for industrial injury claims (Dempsey et al., 2000).

The mix shown in table 3 has a FPDF of about 25 and a similar relative sweetness to the previous mix. A mix with this FPDF would be easy to scoop and quite soft at -18°C.

It is relatively easy to produce a table listing FPDF values against recommended serving temperatures. As a general guideline gelato and ice cream producers should formulate mixes with FDPF values that give around 65 to 70% frozen water at the intended serving temperature. This can be done simply, either by trials or determining the freezing curve for the gelato mix and establishing the temperature that the mix is 65 to 70% frozen.

Regretfully accurate information on the precise relationship between FPDF is not readily available outside of companies some of which consider the the information to be commercially sensitive.

Lactose depresses the freezing point of water in a similar way to sucrose but is generally not included in FTDF calculations in the UK and North America. In continental Europe PAC is widely used to characterise ice cream mixes.

Examples of PAC calculations are given in examples 5, 6 and 7.

In example 5 a simple mix containing 10% MSNF is considered however the ingredients required to obtain these solids have not been defined.

The calculations described in example 6 are a little more complicated since several sweeteners are used. This is a fairly typical Italian Gelato recipe designed to make gelato for serving at around -11°C. The gelato will be relatively easy to scoop at this temperature.

Are there advantages in using the Potere Anti Congelante method of calculating freezing point depression factor?

Yes, there are several advantages.

Most gelato manufacturers have good information on the relationship between PAC values and serving temperature and this information is relatively easy to obtain.

The PAC method should be used when batches of ice cream of significantly variable lactose concentration are being produced e.g. when ingredients containing high concentrations of lactose are used or mixes give softer than expected ice cream. Note, either of the methods described in this article will help manufacturers achieve the production of ice cream of consistent hardness.

Again manufacturers require a table showing PAC values that give ice cream or gelato of ideal hardness at particular temperatures.

I cannot emphasise enough how useful it is for anyone seriously interested in product development of ice cream or gelato to be able to construct a freezing curve for their mix.

It is usually straightforward to reformulate mixes to obtain ice cream of the required hardness (note relative sweetness must also be considered!) providing the ice cream maker can provide a table showing the percentage ingredients on a weight per weight basis. Replacing sucrose with a mixture of fructose or inert sugar and glucose or high DE glucose syrups can easily be used to produce a range of mixes with defined hardness characteristics. The addition of relatively small quantities of glycerol or ethanol (e.g. from whiskey, rum and various spirits) can also be used to significantly lower the FPD.

The following examples, Examples 8 and 9, are intended to further illustrate how mixes can be reformulated to produce ice cream or gelato of defined FPDF or PAC values.

Further FPDF examples have been provided by Hull, (2010). Spreadsheets for calculating the relative sweetness and RFPD of ice cream mixes can be downloaded from this site.

More information on this important topic, examples of freezing curves and spreadsheets for calculating curves refer to the article on freezing point curves.

This article, and the article on the relative sweetness of ice cream, would not have been written without the prompting of Mr Lee Williams of Valenti’s Gelato-Artisan.

Lee Williams, an artisanal gelato manufacturer and consultant based in Cornwall, had studied gelato manufacture in Italy and had seen the benefits of the Potere Dolcificante (POD) and Potere Anti Congelante (PAC) methods in gelato manufacture. He contacted me to discuss how these continental methods could be used in the UK and Ireland. I hope that these articles will be of benefit to students and artisanal ice cream and gelato makers.