Why is the freezing curve of an ice cream or gelato mix important?

Freezing curves are useful in developing new ice cream and gelato products and predicting the hardness of the ice cream produced from particular mixes at designated temperatures, including the serving temperature. Curves can also be used to predict sensitivity to heat shock, storage stability and resistance of packaging materials to deformation during distribution and storage.

Note that as a guideline aim for a mix that gives around 65 to 70% frozen water at the serving temperature.

It is relatively easy to calculate the FPD of an ice cream mix and to use this information to produce a freezing point depression curve that predicts the % water frozen at specific temperatures.

Leighton (1927) devised a method for calculating FPD in ice cream. His methodology was improved by Bradley and others in the early 1980’s (Bradley,and Smith, 1983; Bradley,1984). Integral to the Leighton method was the FPD data obtained by Pickering (1881) for sucrose solutions. Detailed explanations of how to use the Leighton method have been given by Goff and Hartel (2013) and Jiménez-Flores et al. (2006) and will be summarised.

First the the sucrose equivalence (SE) of lactose and all the sweeteners used in the ice cream mix recipe is calculated by multiplying the % sweetener in the mix (units are important here, g/100g water) by its FPDF , e.g. if a mix contained 5 g glucose in 100 g of water the SE for the glucose contribution would be 5 x 1.9 = 9.5. Data on the FPDF of sweeteners can be found in Table 1 of the article discussing hardness and scoopability of ice cream and gelato. The % lactose in MSNF and standard whey powder is assumed to be 54.5% and 76.5% respectively (Van Slyke and Bosworth,1915).

The total SE is determined by summing the SEs of all the sweeteners and the SE in the aqueous portion of the mix determined in g/100 g mix.

The FPD for the SE value obtained in this way can easily be calculated by deriving a regression equation between grams of sucrose and FPD using Excel for example. The best fit is obtained by using a fourth order polynomial regression where a R2 value >0.9999 can be obtained. The Excel spreadsheet along with the data set and the regression equation can be downloaded from this site. Next the FPD due to milk salts is calculated using the formula developed by Leighton (1927).

The FPD due to the sweeteners is added to the FPD calculated for milk salts to give the initial freezing point depression of the mix.

Excel spreadsheets for undertaking these calculations are available on the DSFT website.

This is an iterative process using the steps previously described to calculate a series of values for % water frozen against the cumulative freezing point depression produced by sweeteners and milk salts as as outlined by Marshall and Hartel (2013) and Jiménez-Flores et al. (2006).

Examples of typical freezing curves are given in Figures 1 and 2. 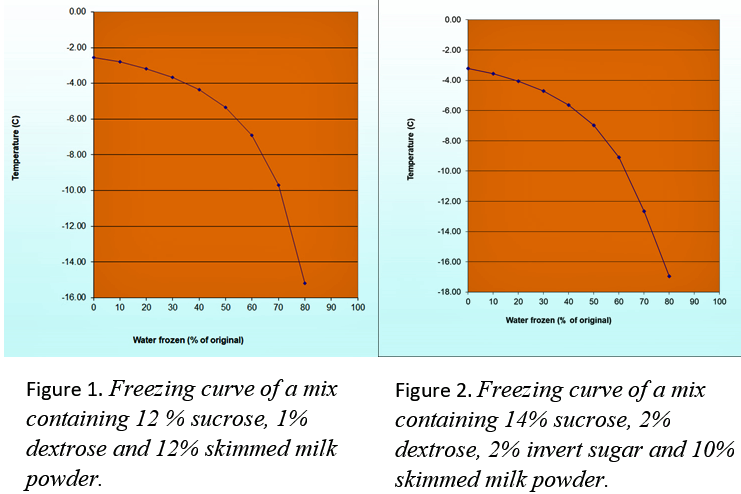 The mix in Figure 1 contains more water frozen than the mix in Figure 2 and will give a softer product. The latter mix is a typical gelato  one and would be suitable for serving from a cabinet set at around 12°C.

Several studies (Baer and Keating, 1987; Juskula et al. 1993) have shown that the Leighton method is fairly accurate however depending on the ingredients used the freezing point depression may vary by ± 0.18°C.