You are here: Home » Morphology of bacteriophages for lactic acid bacteria

Bradley (1967), in a classic review paper, summarised the principles of phage morphology and outlined six basic morphological types (fig. 1). The tailed phages, Bradley's groups A-C account for some 96% of all phages isolated to date and as discussed below belong to the order Caudovirales. Only phages in Group A have contractile tails. All tailed bacteriophages have a nucleic acid core surrounded by a protein coat. Phages active against lactic acid bacteria are approximately tadpole or sperm shaped and have a distinct head terminating in a tail with a hollow core.

Filamentous phages (filament-like or rod-like) (Bradley's Group F) have been well documented for E. coli and Pseudomonas spp. Several reports of filamentous phages for Gram positive bacteria including Propionibacterium freudenreichii have been reported. Propionibacterium freudenreichii is used in Swiss cheese manufacture and a phage designated B6 (below) has been characterised by Chopin et al. (2002).

lactococcal phages and fig. 4 (Lembe et al., 1980) provides examples of typical morphotypes. Note the phage in fig 4.A, belongs to Bradley's Group C, the others belong to Group B. The phages in fig 4.B and 4.C have prolate heads whereas the others, with the exception of 4.A, have isometric head morphology.

Phages e.g. KSY1 (courtesy of Maija-Lisa Saxelin), fig 5, may also possess complex tail appendages, collars and other structural components. These can be difficult to visualise and require specialist staining techniques. While these complex structures can be helpful in differentiating similar phages for a particular strain they have limited value in phage classification. 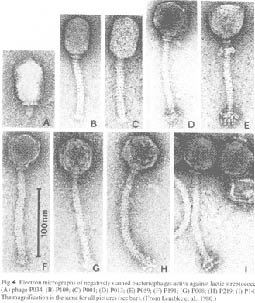 The C-type phage, KSY1 has been shown to cause defects in a Finnish cultured milk product called 'Viili'. The KSY1 phage appears to code for an enzyme that hydrolyses the capsule or slime layer of lactococci involved in Viili production.

Phages for Str. thermophilus, lactobacilli and leuconstocs have also been isolated and studied, however, these are not as well documented as lactococcal phages. Interestingly both lactobacilli and leuconstocs are hosts to both Group A and B phages. Phages for Str. thermophilus have been reported to have isometric head morphology and to belong to Bradley's Group B.

Further information on phage classification is summarised in table 1.

The B6, filamentous phage for Propionibacterium freudenreichii, discussed previously, belongs to the Inoviridae family.