You are here: Home » N Ireland food and drink » The Echlinville Distillery, Northern Ireland’s first licenced distillery in over 125 years

The author with chemist colleague Ronnie Irvine visited The Echlinville Distillery at Rubane, just outside Kircubbin, in the Ards Peninsula in March 2018. Our guide was Graeme Millar, Distillery Operations’ Manager who explained the establishment of the business, its operation and success to date. 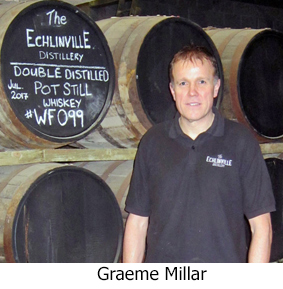 The Ards Peninsula, the name is derived from the Gaelic Aird Uladh meaning "peninsula of the Ulstermen", separates Strangford Lough from the North Channel of the Irish Sea on the north-east coast of Ireland. It has a rich history and unlike many parts of Ulster it has been relatively untouched by “the troubles”. The peninsula has a mild marine microclimate, with dry and fertile soils that supports extensive crop production and dairying. The coast is particularly scenic and home to numerous sea birds.

Graeme outlined the history of the estate that was founded by the Echlin family in the 1730’s. This English “Plantation family” were influential and powerful in Ireland at this time. Bishop Robert Echlin was particularly notable and was the guardian and implementer of the new reformed church in the Diocese of Down and Connor. Charles Echlin, great grandson of Bishop Echlin, bought the two story property in Rubane in the early 1700s and renamed it the Echlinville House and estate. The house forms a majestic backdrop to the Echlinville Distillery.

The distillery was established in 2012, the dream of local man Shane Braniff. He had previously created and established a number of other brands, which included Strangford Gold and Feckin Irish Whiskey. The Echlinville Distillery became the first licenced distillery in Northern Ireland in over 125 years. It  distilled ts first spirit in 2013.

Graeme explained the philosophy of the owner Shane Braniff including the importance of terroir. While terroir is well understood in wine making we were less familiar with the concept as applied to whiskey. The barley and malt used is grown on the estate and Graeme emphasised their belief that the unique conditions present in the Ards Peninsula along with their distillery expertise is responsible for the production of a unique spirit that truly reflects the area. 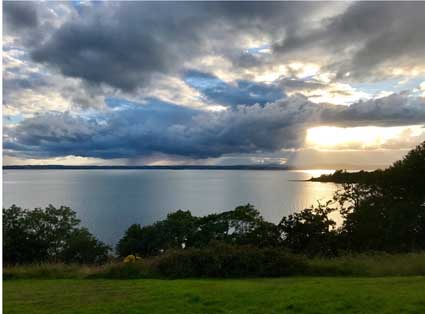 The stills for producing spirt intended for vodka, gin and whiskey were located within an impressive glass structure which showcased the craftsmanship typical of the well-known German coppersmith, Carl, a custom-fabricator of artisan distilling, mashing and brewing equipment.

Following an outline of the distillation process Graeme explained how the ‘heart fractions’ could be isolated using the plate design of the main still and combined to produce spirt with unique tastes and aromas e.g. peppery tastes to meet the needs of customers. 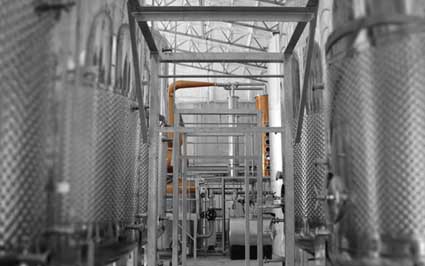 We noted the extensive use of copper and Graeme discussed the catalytic role of copper in both removing and creating flavours and tastes.

Whiskey takes many years to mature and we noted the extensive array of casks maturing including a significant number that had been purchased by customers across the world under a Patron’s Promise scheme; patrons can select from a 60 to 500 L cask containing single malt that will be stored for five years, they can also select the type of cask e.g. once-filled Bourbon. 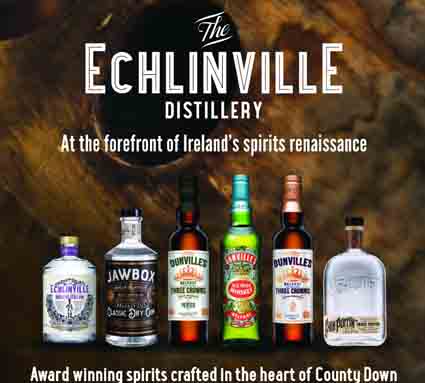 The company produces gin, whiskey, vodka, and Irish poitin and has received several awards. Its Jawbox Belfast Cut Classic Dry Gin and its Dunville’s Belfast Irish whiskey have received quality awards e.g. Dunville’s PX has been named the Best Irish Single Malt 12 Years and Under for the third year running – a rare achievement in the whiskey industry. The win is the latest in a string of successes for Dunville’s PX, which also won the 2016 Irish Whiskey Award in the same category.

It was great to meet up with Graeme. His food technology background combined with his extensive brewing and distilling training and experience are making a major contribution to the development of Echlinville Distillery.  Echlinville has great facilities and is managed by a skilled and inspired distiller who lives for his vocation. It already employs fifteen local people and uses local barley as its main raw material so it is making a significant positive local impact. We noted that in the absence of a local Executive the company cannot get support for training new employees. Approval of a training grant for new employees requires Executive approval.

All photos except for the one taken by Ronnie Irvine of Graeme Millar are copyright of the Echlinville Distillery.