You are here: Home » Preparation and storage of high titre lactococcal lysates

It is frequently necessary to produce and use high titre phage preparations.

This section provides summary information on the production and storage of high-tire lactococcal phage preparations.

Purified suspensions of phages (genetically homogeneous phage populations) may be isolated by research workers using the technique described previously, obtained from research centres or culture/phage collections. They are generally in freeze-dried form or suspended in broth, whey or other liquid. It is more convenient to work with liquid preparations than freeze-dried preparations. Note freeze-drying almost invariably results in a significant drop in titre.

The preparation of large quantities of high titre phage lysates or the maintenance of existing phage stocks may be performed in broth or milk-based media. In general, broth media are more convenient to work with. However, milk media are useful in some instances.

1. Some phage-host systems give much higher titres in milk.

2. Old phage lysates or lysates which are contaminated with moulds (perhaps the most common class of contaminants) may contain low concentrations of phage; often two preparations in broth may be required to produce a high titre preparation in contrast with just one in milk-based media.

Bottles containing 10 ml of reconstituted skim-milk (RSM) are inoculated with 4% culture and infected with sufficient phage to give 102 - 103 pfu/ml. Higher concentrations of phage may be added but may give a lower yield of virus.

At higher phage concentrations, sufficient phage replication to give maximum titre may not occur due to early cell lysis. Too low a concentration may allow host cells to grow and produce enough acid to inhibit phage production.

Infected cultures are incubated at the optimum temperature for phage production. This is phage-host dependant. Incubation at 30°C for 6h will generally give satisfactory results for most phage. At this time, 1 ml of a 5% (v/v) solution of lactic acid is added to precipitate casein and the whey, containing phage, separated from the coagulum by centrifugation at 5,000 g for 10 minutes. The whey may be neutralised with 0.5 M NaOH.

Neutralisation, however, may not extend storage life nor reduce the drop in phage titre during storage.

Lysates may be freed from bacteria by membrane filtration using membranes with a pore size of 0.45 mµ. Several syringe mounted units are commercially available.

Incubation temperatures in excess of 30°C may also be used, and may give higher titres for some phages. Extended incubation times at 30°C and above are not advisable because of the possibility of secondary growth occurring. Even higher titres, in excess of 1012pfu/ml for some phage-host systems can be obtained by adding ß-disodium glycerophosphate (GP) to the RSM. The addition of GP increases the buffering capacity and by adjusting the phage to cell ratio, marked increases in phage yield can be obtained. RSM containing 1% (v/v) solution is suggested for initial evaluation.

Several broth media are suitable for producing phage lysates. These include M17 and PLGYG.The latter is also known as modified MRS. Broth media are more convenient to use than milk-based media since protein removal prior to membrane filtration is not required.

All broth media must be supplemented with calcium prior to use. Supplementation using calcium chloride or calcium borogluconate solutions to give 5 mM Ca++ is recommended for M16 and PLGYG, a higher level i.e. 10 mM, in my experience, is required for M17 broth. Higher Ca++ concentrations may give higher yields of phage for some phage-host systems.

Unlike traditional media, M17 and PLGYG do not contain buffers which chelate Ca++ which is required for phage replication. M17 and PLGYG are buffered with ß-disodium glycerophosphate (GP). Higher phage concentrations, for some phage-host systems, may be obtained by using lower concentrations of GP in M17 or using PLGYG.

Prior to the development of M17 a combination of TRIS and GP had been used to buffer Ellikers' broth (lactic broth) used to prepare phage suspensions. This medium is no longer recommended for this purpose since it is not suitable for growing a number of Lc. lactis subsp. cremoris strains.

The following method is recommended for producing high titre phage suspensions in broth.

Mass lysis or clearing of the culture generally occurs after 2-4 h incubation. Time depends on the initial phage titre, the particular phage-host system and the calcium concentration used. With some old phage suspensions, especially if stored under acidic conditions, two propagation's in broth may be necessary. The need for a second propagation in broth will be apparent if mass lysis does not occur by 6h incubation.

The considerations regarding incubation temperature, duration of incubation and phage concentration discussed previously with regard to milk also apply to broth.

After 6h incubation, the lysates can be filtered to remove bacterial contaminants. However, it is preferable to centrifuge first to remove cell debris and bacteria since this allows easier filtration. Some suspensions may be very viscous. This is due to bacterial DNA which has been released from the starter cells by lysis. Storage overnight will generally reduce the viscosity; nuclease enzymes degrade the DNA. Phage preparations produced by this method generally have titres ranging from 109- 1011 pfu/ml. 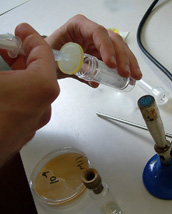 For information on the formulation of PLGYG and M17 broths click here.

Lactococcal phages are resistant to a wide variety of adverse physical conditions and can survive for many years in dust and in milk films. So, it is not particularly difficult to store phage in such a way that viability is maintained for many years. Maintaining high tire preparations for extended periods is more challenging.

Storage at room temperature – some phages show no significant decrease in titre for several weeks. Titre drops with storage time. Not recommended.

Storage at 2°– 5°C - lysates in M17 or PLGYG generally decline only slowly in titre with reductions in 5-10 % over 6 months. This method is only recommended for storage up to 2 months. However, preparations not worked with previously should be titred at intervals as some phages may show significant reductions in viability.

Frozen storage – Preparations may be –

b. Frozen in the presence of a cryoprotective agent.

Lactococcal phages are generally stable to freezing and to thawing. Some are also relatively insensitive to repeated freezing and thawing over extended periods. This is not good practice and is not recommended!

Henning et al (1963) and Nyiendo et al. (1974) have reported increased numbers of survivors if 15% v/v glycerol was used as a protective agent during storage at –20°C.

Keogh and Pettingill (1966) found that quick freezing (-70°C) followed by storage at –15°C gave increased stability for some phages compared with freezing and storage at –18° C.

Phages frozen in PLGYG store well at –30°C with or without glycerol for extended periods.

For long term storage, phage stocks in M17 or PLGYG (small quantities – not to exceed 15 ml, otherwise very slow freezing) can be stored at temperatures of at least –18°C. Lower temperatures e.g. –30°C should be used if available.

Storage at -196°C, using liquid nitrogen, may be necessary for a very small number of phages.

Before relying solely on freezing as a preservation method the author would strongly recommend that new phage stocks should be held at 2°– 5°C in addition to those stored under frozen conditions just in case the phage is not stable to freezing.