There has been a lot of publicity concerning the financial problems of some of the major UK-based food retailers, particularly Tesco and M&S. The larger retailers do have a well deserved  reputation for providing quality food and it was with some surprise when I received photographs showing children handling un-packaged bakery goods from in-store bakeries and then allegedly returning these to the shelves. One report concerned a child with a runny nose! 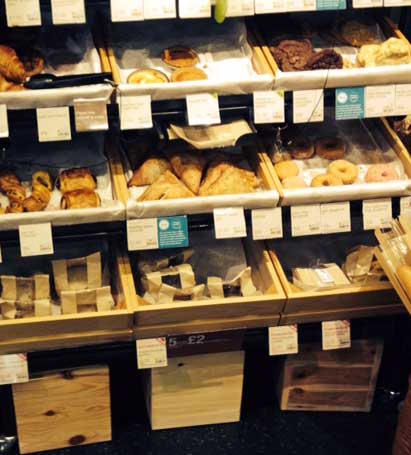 Packaged and non-packaged bakery goods for sale at a major UK food retailer.

I get lots of emails about a range of food-related matters. I can now report on an emerging theme, consumers are starting to complain about the aesthetics of selling unpackaged bakery goods.

Recently I visited several major retailers to look at the situation and yes quite a lot of bakery goods were unpackaged. Apart from tongs and bags to put goods into, there were no obvious  hygiene controls e.g. sneeze guards. So I can understand the aesthetic objections to the nice 'old world' look that some of these bakeries have.

This is not an issue for a particular retailer it concerns several. When I asked the check out operator at one of the stores had anyone ever mentioned that they were unhappy that bakery goods were not packaged she said "Yes. Quite often".  I sometimes wonder if senior management of major UK food retailers, and their partners, actually shop in their stores?