You are here: Home » News » At last definitive scientific evidence of the benefits of masks in the fight against Covid-19?

I had the pleasure of supervising three undergraduate dissertations at CAFRE’s Loughry Campus this year. All three students presented work of a very high standard and I intend to publish summaries of their projects on this website over the next few months.

Gemma Devine and George Doran isolated thermophilic lactic acid bacteria from raw milk and milk ex-pasteurizer at two cheese plants, one in Ireland and the other in Great Britain.  George and Gemma found rapid growth of thermophilic streptococci in the plant in GB. Isolation and identification of the lactic acid bacteria suggested that they could be described with high probability as Streptococcus thermophilus. Sufficient growth of Str. thermophilus was obtained to require significant reduction in the use of starter throughout the production run. 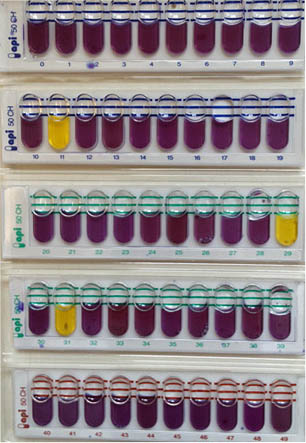 Carbohydrate fermentation profile of a typical thermophilic streptococcus isolated from pasteurized milk from a cheese plant. The streptococcus fermented glucose (11), lactose (29) and sucrose (31) out of the 49 substrates available in the API 50 CHL microbial test kit.

Kathryn Wilson investigated the manufacture of a vegan ice-cream analogue in which milk fat was replaced with coconut fat and the milk-solids-not-fat replaced with vegetable protein.  Both sucrose and maltitol were evaluated as sweeteners. Kathryn developed a good product that with further work would have commercial potential. Maltitol, a polyol, with a lower glycemic index and energy density than sucrose was found to be an effective substitute for sucrose.

This was a challenging project in that vegetable proteins do not have the neutral taste of milk proteins. Hence suitable flavours to both mask and 'flavour' the frozen dessert were required.

Kathryn, George and Gemma will graduate at Loughry on Friday the 26th June, 2015. I am delighted to congratulate them on their success!