You are here: Home » News » Article on UHT processing and free On Line calculators added

Congratulations to Gary Andrews, who has been awarded "Food Hero of the Year" at the Grow Make Eat Drink Awards 2016.

Gary Andrews, a Dairy Technologist at CAFRE, was nominated for the award by Paul McClean, the owner of Kearney Blue Cheese, for his contribution towards the development of the artisan cheese sector in Northern Ireland. 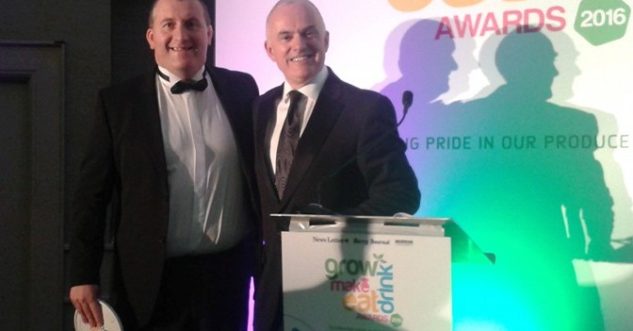 Gary was presented with the award by Frank Mitchell from UTV.

Kearney, Blue, a full fat, mould-ripened hard cheese, was  developed by Paul McClean in the village of Kearney, near Cloughy, Co. Down in Northern Ireland and is a cheese connoisseur’s delight. Gary has worked with Paul McClean and many other entrepreneurs to help make their product concepts commercial successes and is a well-deserved winner.