The growth of thermophilic streptococci in pasteurisers during long production runs has been known for some time (Driessen and Bouman, 1979). These organisms include Streptococcus thermophilus­ and organisms that are referred to as Str. thermophilus-like (Mullan, 2003); they have some of the phenotypic characteristics of Str. thermophilus but differ in that they grow in 4% salt solutions and utilise maltose and other carbohydrates. The Str. thermophilus-like bacteria were designated as Str waius by Flint et al. (1999) but were later reclassified as Str. macedonicus (Manachini et al., 2002).

Growth of Str. thermophilus and Str. thermophilus-like lactic acid bacteria to high concentration in milk in pasteurizers can cause significant problems in cheese making. These include excessive openness and overt gas production in cheese, off flavours, discoloration particularly in annatto-coloured cheeses and major disruption in process parameters in varieties in which the manufacture is tightly specified e.g. Mozzarella.

In this student project the authors investigated why less starter culture was required throughout the production run in one cheese making plant in Great Britain compared with a similar plant in Ireland.

The project had two major objectives. To:

Colonies were isolated, purified and allocated to genus as described by Billie et al. (1992) and Aprea et al. (2005) with the exception that the M17 agar used was acidified with hydrochloric acid to give a pH of 5.5 to make it slightly more selective for lactic acid bacteria and to inhibit swarming. API 50 CHL test kits and the API database from Biomerieux, Grafton Way, Basingstoke, Hampshire, England, RG22 6HY were used to confirm genus and allocate isolates to species.

The growth of thermophilic bacteria in pasteurized milk from the cheese plants in Great Britain and Ireland.

The growth of thermoduric bacteria in pasteurised milk samples from the GB-plant is shown in Figure 1. 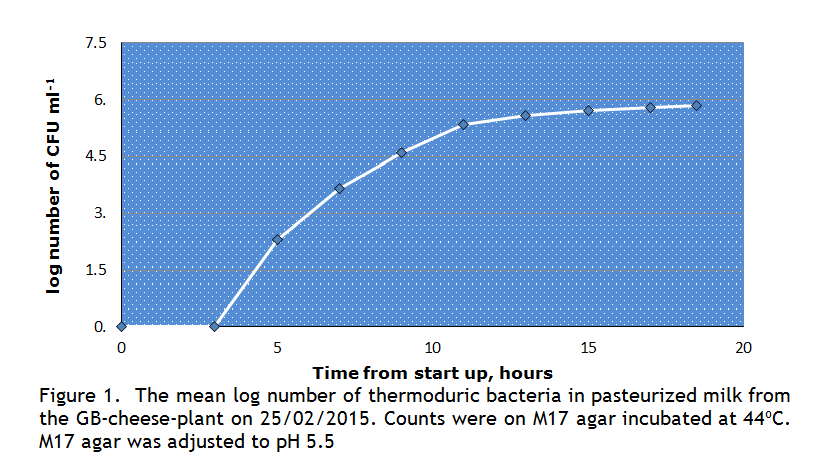 There was no detectable growth during the first 3 hours of production.  Growth was detected five hours into production when 205 CFU/ml were recorded. After nine hours there were 3.95x104 CFU/ml and by 11 hours growth in the milk had reached 2.25 x105 CFU/ml.  After 11 hours the rate of growth declined gradually to the end of production.  A maximum count of 7.2x105 CFU/ml was recorded at the end of the production.

The growth of thermoduric bacteria in pasteurised milk samples from the Irish-plant is shown in Figure 2. 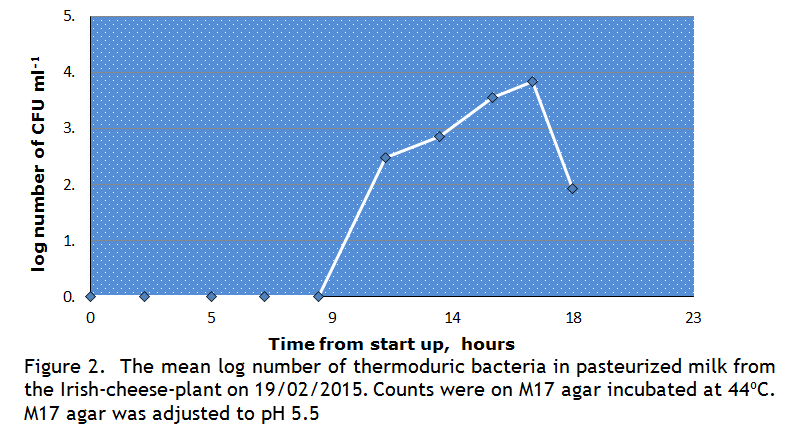 There was no detectable growth in the pasteurized milk during the first 8.5 hours of production for the plant in Ireland. Growth was not detected until 11 hours into production when only 305 CFU/ml were detected. By 13 hours the count in the milk had only increased to 720 CFU/ml. Growth reached an apparent maximum of 6.8 x103 CFU/ml after 16.5 hours of plant operation. Surprisingly the next sample taken at the end of production, at 18 hours, showed a marked decline to only 85 CFU/ml.

Changes in starter use throughout production in the cheese plant in Great Britain and Ireland. 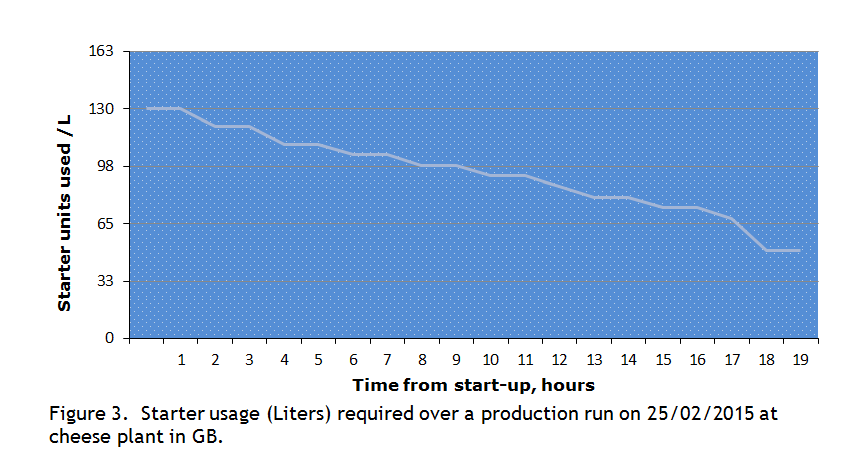 Raw milk was sampled from the Irish plant on two occasions. Data for the second trial are given along with the results from the plant in GB are shown in Table 1. 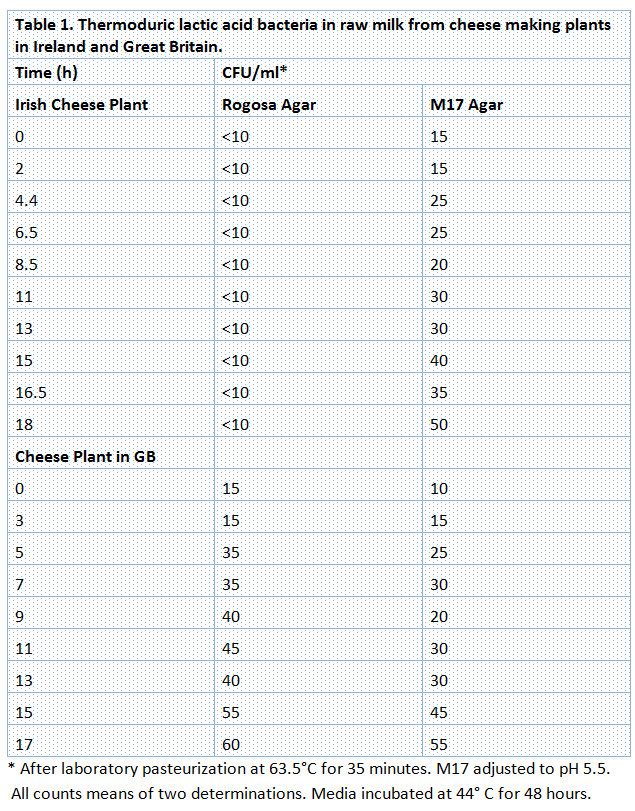 Both plants were found to have similar, low counts of thermoduric organisms growing on MI7 agar. The raw milk samples from the Irish plant demonstrated no growth on Rogosa agar (<10 CFU/ml) in both trials. In the first trial swarming Bacillus species prevented enumeration of colonies on standard M17 agar from the Irish samples and pH adjusted M17 agar was used in subsequent studies to eliminate swarming. In contrast low numbers of bacteria were found on Rogosa agar from the raw milk used in the plant in GB.

Characterisation of the thermoduric bacterial isolates from raw milk from cheese plants in Ireland and Great Britain.

All the Rogosa isolates were Gram-positive, catalase-negative mainly coccus-shaped bacteria. Only 33% of the isolates from M17 agar were lactic acid bacteria. The thermoduric streptococci from the Irish plant were identified with high certainty (>82% probability) using the API 50 CHL test kit and the API database as Str. thermophilus. This organism was not obtained from the raw milk obtained from the plant in Great Britain. The API 50CHL database suggested that the isolates were Lactobacillus helveticus.

Characterisation of the isolates of lactic acid bacteria from the pasteurized milk at the cheese plant in Great Britain.

Due to resource constraints only the pasteurized milk from the cheese plant in Great Britain was studied.

All the isolates tested were Gram-positive.  Eighty percent were catalase negative. The catalase positive isolates were not classified due to resource and time constraints.

Almost 90% of the lactic acid bacteria tested, were identified as Str. thermophilus (over 98% probability) using the API 50CHL database. Typical isolates were Gram-positive, catalase-negative cocci occurring as pairs or short chains, and utilised glucose, lactose and sucrose from the 49 substrates in the API 50CHL test kit.

Due to the nature of this project, a student project using milk samples from two countries, only limited replication was possible. Caution is therefore required in the interpretation of the results obtained.

The thermoduric counts in the raw milk from both plants were low. However, it would appear that the lactic acid bacteria present were qualitatively different.

Significant growth of thermophilic streptococci in pasteurized milk throughout cheese production was found in both plants. This has been reported by several researchers including Bouman et. al. (1982).

Because the milk is flowing relatively quickly in pasteurizers it is unlikely that bacteria would have had time to multiply in the milk as planktonic cells alone and therefore adherence of bacteria to the production surfaces, through biofilms, is probable. Bacteria can start forming biofilms within 5 to 10 seconds on cleaned surfaces (Marchand et al., 2012) and Str. thermophilus contamination levels up to 107 CFU/ml of milk have been reported after biofilms developed for 8 hours in a pasteurizer (de Jong et al., 2002). The extent of biofilm development was not quantified by the sampling methods used in this study. It is notable that Marchand et al. (2012) has suggested that for each planktonic bacterium detected, there might be close to 1000 organisms present in biofilms.

We cannot explain the reduction in count in the pasteurized milk towards the end of the production run in the plant in GB. It may be a sampling or plating error. It is also possible that ‘sloughing off’ of the biofilm could have occurred prior to sampling resulting in a reduced count.

Characterization of the thermoduric isolates of lactic acid bacteria in the pasteurized milk from the plant in GB suggested that most can be classified as Str. thermophilus. No Str. thermophilus-like organisms similar to Str. macedonicus were found. The origin of the Str. thermophilus strains isolated was not determined and it would be interesting to see if they originated from e.g. bulk tank milk on farms, plant equipment or from aerosol contamination of the factory environment by the cheese starters used.

The authors acknowledge the excellent technical assistance of Mr Edmund Slaine. Thanks are also due to the staff from both cheese making plants who provided milk samples and feedback on the results obtained.