You are here: Home » Technology » Consultancy charges on DSFT

This article is available On Line to enable editing. Its draft status is scheduled to be removed by September, 2015. In the meantime comments are invited from scientists and technologists familiar with the subject area to help improve this article. I wish to acknowledge the generous comments and advice received from workers in this area. As a result of the feedback I will include more information about the principles behind modelling bacterial growth and the limitations of models.

The purpose of this article is to explain how to derive a simple Ratkowsky square root model (Ratkowsky et al., 1982) that describes the growth of a fault causing bacterium on cooked meat over the temperature range 10° - 35 °C.

An example of the growth curve of the fault causing bacterium on tomatoes at 35°C is shown in figure 1. 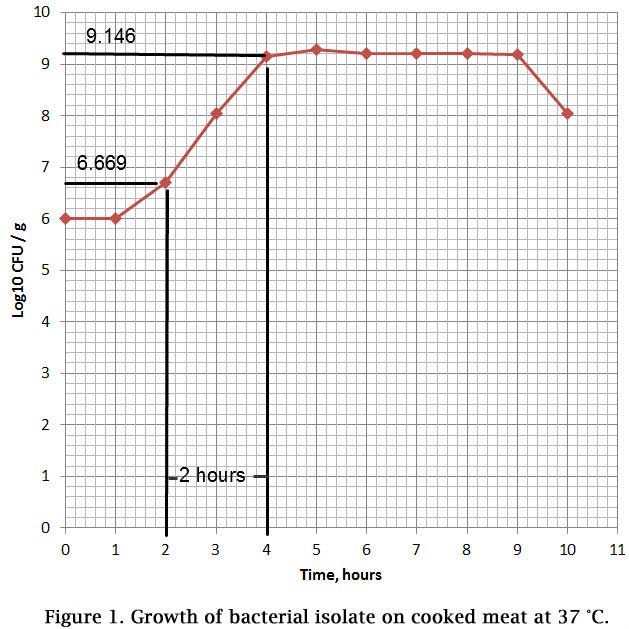 The specific growth rate (k) is calculated for the  logarithmic phase using equation 1.

We can now use the Ratkowsky square root model (Ratkowsky et al., 1982) to derive the relationship between the growth rate constant, temperature and the initial number of microorganisms.

The curve produced using linear regression (black line) and the actual data (blue line) using the data in table 1 is shown in figure 2. 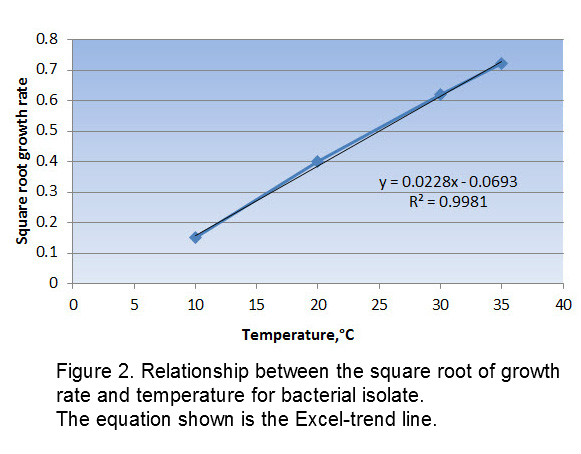 Using Excel, the linear regression equation that describes the trend line (black line in figure, for the growth of the fault causing bacterium on cooked meat over the temperature range 10° to 35 °C is:

Use of Combase Tools

While the calculations described previously are not difficult it is possible to automate the derivation of growth rate equations using free tools from Combase.  DMFit is an Excel add-in to fit log counts vs. time data and extract parameters such as growth rate. It can be downloaded from Combase.

Validation is an important element in model development. The literature cited below provides useful insights into model development and may prove useful during validation. The USDA Pathogen Modelling Program (PMP) and ComBase should be consulted for pathogen-models.